Thomas Mell Toulson --- one of the original immigrants in my family, and one of the few Toulson's that left England.  He emigrated in 1856 from Lincolnshire to Iowa, at the age of 22.  He arrived into New York City, from Liverpool, on June 25th.  He was from rural Lincolnshire and had a life as an Agricultural Laborer ahead of him......so I assume her was attracted by one of the emigration schemes that were advertised at that time in rural England. Go to America, there is land to be had!!

By 1860, he was in Clinton, Iowa and in 1862 he married Matilda "Tillie" Jane Mell.  I only recently discovered her maiden name, which has led to lots of head scratching! Was she a cousin, distant relative? She was born in Ohio, but it appears her parents were born in England.  Another line I must chase down!  On their marriage application (below), he lists his middle initial as L, so possibly he didn't want it know that his middle name was his wife's maiden name??!! 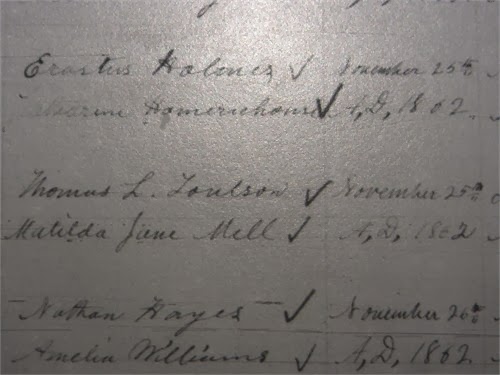 Tillie and Thomas had 5 children, with all of them dying as infants. It appears Tillie may have died in childbirth in 1872.

In 1873 Thomas remarried a Martha Langley. She died sometime before 1880, and he married for a third time in 1881 to Catherine "Katie" Louisa Gill, who was an Irish servant, living in the same household as Thomas in 1880.

He also sponsored his nephew, George Henry Toulson (my Grandfather), who emigrated in 1903. George worked in Clinton, Iowa for about 3 years on a golf course.  Another nephew, also named George Toulson, was living with he and Matha in 1885.

Both Thomas and Katie led long lives, with Katie dying in 1912 and Thomas in 1918 at the age of 85. He held various occupations in his life; farm servant, laborer, working at a horse stable for the railroads, and blacksmith.

Over the years, I've slowly made progress on finding records documenting his life. It was easy to find him in the Federal Census, and even the Iowa State Censuses, but finding his marriage records was a recent discovery.  I'd love to find more records documenting his five children's birth and burial.  I have names for two of the children (Francis E. and Anna) and burial info for one (Francis E. in 1868).

In my mind, he is the pioneer of the Toulson family in the USA.  He set the example that you could come and make something of yourself here.  The other Toulson's that followed, settled in Nebraska, Oklahoma, and Utah.

Posted by My English and Irish Roots at 9:03 PM