For many years, one of my cousins has holidayed in a small Devon village called Hope Cove.  It is beautiful, with thatched cottages and a lovely beach.  He has always told me that in the Pub there are some lovely old photos of the local fisherman and some are named HURRELL.  This cousin relates on a completely different line, but knows that HURRELL is one of my direct ancestral lines.

I've never been able to connect any of my South Devon Hurrell's to the village of Hope Cove, and so never thought much more about it.

Today in some random searching, I found a hitherto unknown child, Thomas Hurrell, b 1847 to one of my 1st cousins 4x removed, William Henry Hurrell.   Thomas only appears in the 1851 Census with the family, and then by 1861 is a 13 year old servant living elsewhere.  He disappears in 1871, and reappears in 1881, as a married fisherman in Hope Cove.  He lists his birthplace as Marlborough, when I have it as West Alvington (but they are next door to each other, so understandable).

I then found his marriage certificate at Marlborough, which confirms his Father was William Hurrell, and that he was residing at Hope Cove as a fisherman.

He and his wife go on to have 6 sons, 3 of whom join the Royal Navy, and another son dies in World War One.   The eldest son Peter Bailey Hurrell, appears to have stayed in Hope Cove and went on to have a large family.

This is Peter Bailey Hurrell, in 1926, when he was a member of a lifeboat crew that went to the aid of a steamer off Hope Cove. 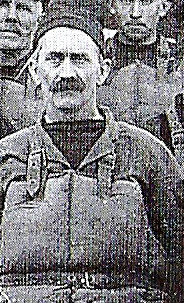 Posted by My English and Irish Roots at 4:02 PM