For many years I've been searching for the children of my Great Uncle, Albert Edward "Fred" Pearce. My only leads were that he married an Edith Harrison near Exeter and had 2 sons.  I found one son, Charles M, born in 1913 in Exeter area, but nothing further.

I know that "Fred" (and I assume his wife) were living in Clapham, London in 1915 - based on a business card he put into his Sister's Autograph Book, on her departure for the USA.  He was a commercial artist and used the name Fred Mont. Pearce 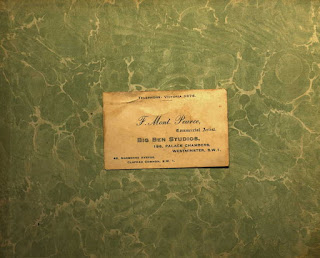 I had assumed that this might have been Mortimer, as a tribute to his Sister's husband who essentially raised him --- but now the name Montague appears to be the middle name he was using.  I deduced this from the Civil Registration for his son's death.   In looking for the death of Charles M Pearce, born 1913 -- I found a death for Charles Montague Pearce, born in the correct quarter of 1913, and dying in Islington (London) in 1972.

Now, where did the name Montague come from??

I've also yet to find Alfred Edward "Fred" in the 1939 Register, or the death of his wife Edith (I think she died relatively young, as I know Fred had a "common law wife" named Maisie later in life).  And where did Alfred Edward "Fred" die?   Was he in Islington near his son?  What was the other son's name (brother of Charles Montague Pearce)? Was that son born in London?

I've ordered the death certificate for Charles Montague Pearce -- hoping there will be an informant and a better address than just Islington Reg District.

UPDATE:  He died in Islington on 14 Aug 1972.  His residence was 27 Hamilton Park, Islington, and he was listed as a Commercial Artist
Posted by My English and Irish Roots at 8:33 PM