I get lots of Ancestry notifications, and usually do a cursory glance at them......well, last night I saw in my email a notification of new comments (not hints) on my Family Tree.

The comment was on my SIMON family -- which had been a dead end.  My GGG Grandmother was Jane Simon.  She was the mother of Jane Mell who married Michael Toulson.

All I knew was that Jane married William Mell in North Cockerington in 1805, had a son Thomas there in 1806, and then for an unknown reason, they moved to Aunsby, where my GG Grandmother Jane Mell was born in 1809.   Aunsby is quite a distance from North Cockerington, so I suspect he must have moved for a job (possibly a Farm Bailiff or some such).

Jane Simon was my dead end -- common name in the northern part of Lincolnshire, where I wasn't as familiar with the villages and families.   Luckily, the comment on my Family Tree said:

Aha!!! The name should be Symonds!! And the village of Alvingham is the next village north of North Cockerington. These villages are very small, so there aren't alot of families to sort out! A genealogist's dream!

The second comment on my tree gave me hints as to the parents William and Rebecca:
William Symon married Rebecca Burman (1762) widow of John Burman, maiden name Skipwith (1st marriage 1760)

OMG, what a bonanza of new names and clues! I started on the SKIPWITH name, as that seemed easiest to follow, and quickly found SIX generations of SKIPWITH's --- going back to 1535 in Theddlethorpe All Saints, Lincolnshire. The family had lived in this area of North East Lincolnshire between the North Sea and the Wolds of Lincolnshire for almost 250 years (that I can document).

And Rebecca's father Thomas Skipwith is actually memorialized in the Alvingham Cemetery with a headstone (a rarity in my family that never seemed to have money to leave a headstone!). Thomas lived to the age of 93! He was born in 1711 and died in 1803. I descend from his first wife, and after her death he remarried and was married for 60 years to his second wife! A remarkable life for that time period! 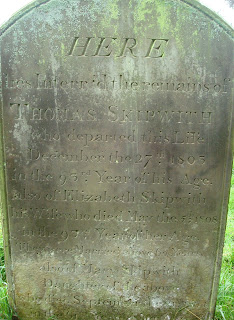 Now to work on the siblings of the Skipwith's and flesh them all out. There is a famous Skipwith' family that originated in Skipwith, Yorkshire and relocated to Lincolnshire in the 14th Century. At first glance I don't see a connection with my branch (of course, I'm the poor relation!) -- but will keep searching.

And also, need to see if I can make any headway on William Symond's, Rebecca Skipwith's husband.
Posted by My English and Irish Roots at 11:50 AM