Nathaniel Hurrell Pearce is my Great Grandfather -- I have a few photographs of him, and he has always fascinated me.  Maybe it's the name -- (he always uses Hurrell as his middle name),  or maybe it's the fact that with photos I could visualize him and his life.  But it turns out, I couldn't have imagined his interests and involvement in his community. 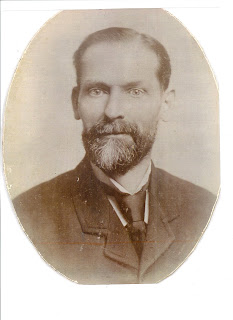 I've been able to amass a good collection of documents and information on him over time -- and just today stumbled across almost 20 different articles in the Torquay newspapers relating to him. Clearly he was an active member of his community and church.

I knew he was a Shoemaker by trade, and had moved from Eastern Cornwall to Torquay, Devon around 1877 or so.  A second cousin gave me this photo of him, with a group of Sunday School teachers, taken somewhere in Torquay -- so I knew he was involved in his church. 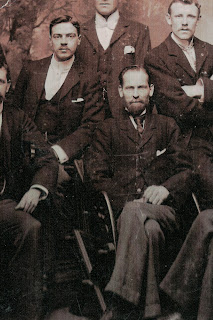 I had found a few articles previously regarding the death of a son in 1881 in Torquay, where Nathaniel is noted as a Shoemaker.

In the latest articles I've found, he is a prominent community member in the Ellacombe area of Torquay,  is a member and Honorary Librarian for the Torquay Liberal Club, and a member of the YMCA Literary and Debating Society.  He also served in lay minister and Sunday School capacities for the Market Street Primitive Methodist Church in Torquay.  He wrote a very eloquent letter to the editor of the Torquay Times in 1907, regarding another Methodist Chuch member.

He was also noted as delivering several speeches at both the Literary Society and Church events.

All of this is quite surprising, considering he was born in a small village in St Ive, Cornwall and worked independently as a Shoemaker.  It seems he had a keen sense of duty, was educated more than I thought, and was dedicated to his religion.   It makes me quite proud to discover that I had an ancestor who was involved in his community and church, more so than I ever imagined.
Posted by My English and Irish Roots at 7:20 PM