Oh this family just gets more and more interesting......now I have 1st cousins marrying each other!  Thomas Furzland, b 1778, a Mariner marries his 1st cousin Agness Fursland b 1784.  Thier parents were siblings Philip and William, sons of Philip Fursland and Agnes Toms.

And as I further research this family, the story takes a sad turn.  Thomas and Agnes had six children between 1815 and 1825 in Ugborough and Modbury, Devon.   Times must have been hard, as all the children are apprenticed out when they reach the age of 9 or 10.  They are apprenticed out by the Parish, since they are "poor children", and the terms of their indenture are to the age of 21 or until married.  I found some of them in 1841 and 1851 living with their Masters.  For those I haven't found, at least I have a Masters name that I can search under. 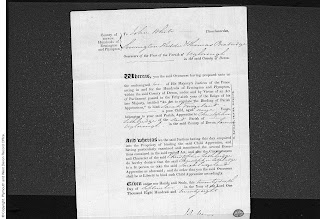 And even though the siblings are all working throughout their teenage years, they seem to stay close, as 4 of them end up in St Helier, in Jersey by 1851.

The oldest daughter Elizabeth "Betty" marries in Jersey in 1842. She and her husband have 8 children in Jersey, Hampshire, and Cornwall.

Daughters, Sarah and Maria also marry and settle n Jersey.  Brothers Thomas and William are both in Jersey in 1851, with William marrying and living back in England by 1861. Thomas seems to disappear.  The other daughter Prudence marries in London to an Army soldier, and disappears.

It seems to show the strength of a family, that despite their poor circumstances and being apprenticed out at young ages, they kept in touch and ended up living close to each other - despite it being so far away from their home village.

The family also goes on to use lots of the same family names used over and over (Philip, Agnes, Prudence, etc). What a tangled web, no wonder I've always had difficulty sorting them out!


Posted by My English and Irish Roots at 9:29 PM