When I started my genealogy as a teenager, I had very little to go on, but I did have a photograph!.  My Grandfather emigrated to the USA in 1903 from England, and he brought with him this photo of his mother, Alice Elson. 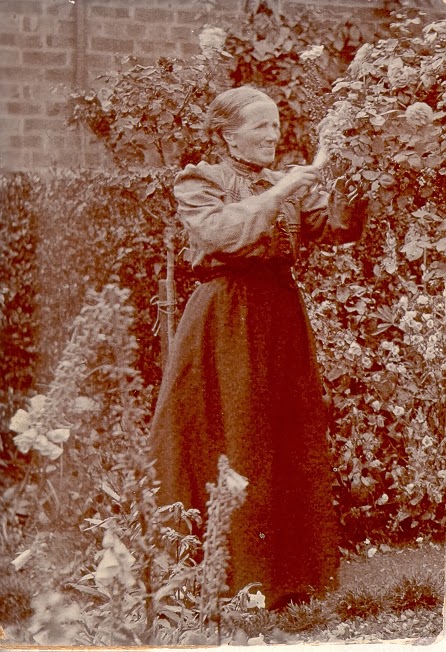 Alice was born about 1832 in Fulbeck, Lincolnshire and died there in 1910. This photo was probably taken about 1900 in Fulbeck when she was in her late 60's.

She led a typical life -- working as a domestic servant at age 16, had 2 illegitimate children at age 22 and 27, one of whom died in infancy, and the other raised by her parents. She married at age 32 and went on to have 6 children, 1 died in infancy, another in a tragic accident.  My Grandfather was her youngest child, born when she was approx. 42 years old.

I have never found a baptismal record for Alice.  Her oldest sister is baptized in Fulbeck, but the next sister and Alice are not.  I surmise the family was living elsewhere in 1831-34, and then returned to Fulbeck in 1835 as the rest of her 6 siblings are baptized there. She had 4 sisters and 4 brothers, that I know of.

For most female ancestors, it is hard to find much information other than the civil registration and census records.  They seem to be born, marry, give birth and die....without leaving much other information.  In Alice's case, this seemed to be the case. I haven't been able to find any bastardy order for her 2 illegitimate children, which would surely add some color to her story.

However, I was lucky enough to find some mention of her in the British Newspaper Archive -- which is a fantastic resource.  In 1888 in the Grantham Journal, she is quoted in the inquest into her son's death:

"Alice Toulson, mother of the deceased, said that when he was brought home he told her he was putting a collar on a horse at the time Cox was placing a bit in another horse's mouth, and just at that time the latter horse backed, pushing him against the manger."

There is also mention of her, in 1890  in the Grantham Journal:


"Notice---All Persons indebted to the late GEORGE TOULSON are respectfully asked to pay their Accounts as soon as possible to the Widow, Mrs. ALICE TOULSON, Fulbeck"

I continue to research her sisters and brothers to see if I can find any descendants with further information on her and photographs of the family. The family originated across the Lincolnshire border in Southwell, Notts, Thurgarton, Notts. and possibly the village of Elston, Notts.   The Elson line goes back to approx. 1735 or so.
Posted by My English and Irish Roots at 8:47 PM