For years I have struggled to find an Aunt ____ Mallard, listed in my Gt Gt Grandmother Mary Shepherd Hurrell's will dated 1812 in Stokenham, Devon.   There was no first name listed, just a line.  The name Mallard was also curious, it isn't common in the area and I couldn't find any Mallard marrying a Shepherd.

Turns out I was making some classic genealogical mistakes....I was assuming it was HER Aunt, so looking at the Shepherd line.  Turns out that in fact it was her late husband's Aunt.  The will states that her children should take up the legacy left by their Aunt (in fact Great Aunt), so I hadn't read carefully enough to look at both the children's father and mother to find the Aunt.

After some recent work on the Hurrell family, I had found some additional siblings for William Hurrell, and one was a Dorothy Hurrell.  I did some cursory searching and couldn't find a marriage for Dorothy, but possibly a death.  I put her to the side and didn't look further for a few days.  Then by chance in some other searches I found that by leaving out the final L in the surname Hurrell, (so spelling it Hurrel), I got some additional hits.  So, I tried Dorothy Hurrel in the search box of Findmypast, and lo and behold what came up? 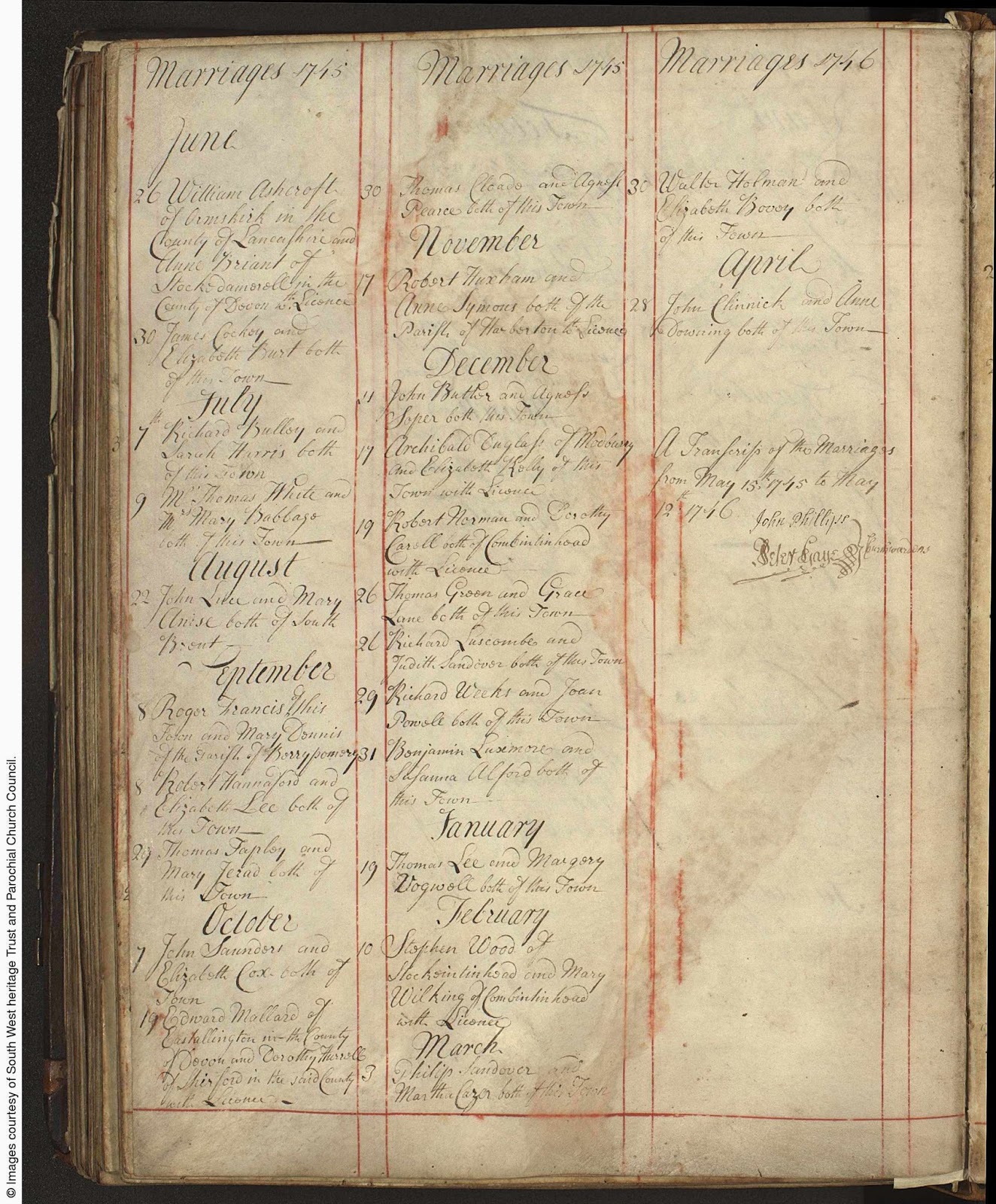 And to further establish that I had the correct couple, it listed her as "of Sherford" and he "of East Allington" -- so definitely the right villages.  Not sure why they married in Totnes, but that's another mystery to solve.

Then the challenge of seeing if I could find anything further on the couple -- children, death dates, and MAYBE a will?!!

I found their death dates, and no children, and then tried finding a will. No luck in finding anything for Edward Mallard, but lo and behold there was a will for Dorothy Mallard in 1801.  BINGO!!!! Now to see if it was available online (fingers crossed).  I found an entry on Findmypast under Devon Wills, but it was just the name and date.  After some searching on The National Archives site I still couldn't find it, despite knowing the date and name.  I then tried some Google searching and it seemed to show it was on the National Archives site, but the last name was misspelled as Matland.  Eventually I found it and was able to purchase and download. 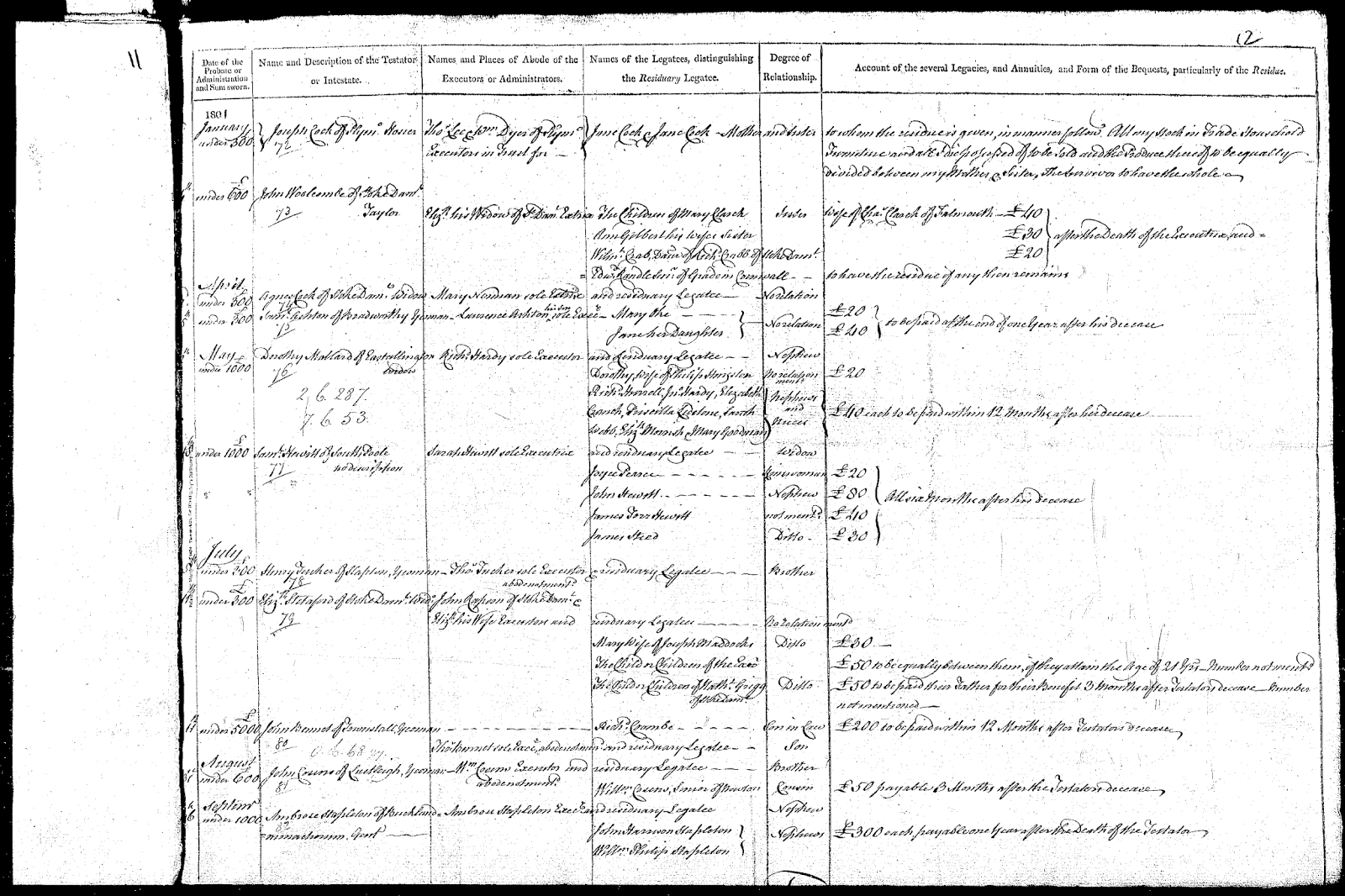 Wow!!!  What a bonanza of names!!  She names Richard Hardy (her nephew) as her sole executor.  She leaves 20 pounds to Dorothy, wife of Phillip Hinston. She is noted as no relation (which isn't exactly true, she is a great niece).  Then she goes on to leave 10 pounds each to her nieces and nephews:  Richard Hurrell, John Hardy, Elizabeth (Hardy) Cranch, Priscilla (Hardy) Lidstone, Sarah (Hardy) Webb, Elizabeth (Hurrell) Morris(h), and Mary (Hurrell) Goodman.

I didn't have Priscilla, Sarah or Elizabeth Hardy in my tree, as these were additional siblings to Dorothy's sister Elizabeth and husband Richard Hardy.  The Hurrell's have me confounded as Mary Richard, and Elizabeth could be from either of Dorothy's 3 brothers (Richard, William and John).  So, more research needed there.  I suspect they are from East Allington, and those records aren't online for the period needed.

Just proves that patience is a virtue for a genealogist.....I've been searching for YEARS for this Aunt and trying to piece this family together, and now that patience has been rewarded with a plethora of new names and lines to follow!