A Civil War Soldier in MY TREE????? But I'm Irish and English!

I'm a 2nd generation American, with all four of my Grandparents emigrating from England and Ireland just before World War One.   I have many Cornish ancestors who emigrated to Australia for the Gold Rush, and some Irish ancestors who emigrated after the Famine, but in general it seems my people tended to stay "home".   I've only found a few of my Lincolnshire ancestors that left the UK for Canada or the US.

So, imagine my surprise to run across an Ancestry tree for my ancestor Isaac Lindsey.  They had all sorts of exotic information (and photos) for this man.  Seemed hard to believe at first, but it all is well documented with sources to back it up. 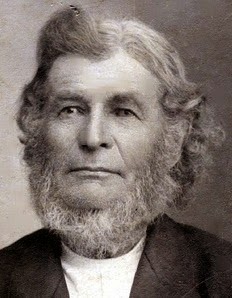 He emigrated from England in 1854 or so,  from Liverpool to New York, listed as a Farmer.  He then shows up in Minnesota in 1870 Census.  Perhaps he was attracted by the advertisements for free land that appeared in England, to entice emigrants to the frontier.

His wife followed, and she must have perished, he joins the Union Army as a 40 year old Private in 1862, and is discharged for disability in 1863, and then returns to Minnesota and marries a widow with 3 children in 1869.   He and his new wife Louisa Jane Culver go on to have 9 children (the final child was born when Isaac was 69 years old).

And for some unknown reason, the entire family relocates sometime between 1885 and 1900 to Louisiana!

I think this just proves, you never know who in your family may have "up and left"!!  I have many an ancestor that just seem to disappear off the face of the earth, without leaving a death record, and maybe it's because I'm not looking broadly enough!

Isaac Lindsey left a huge number of descendents, and thankfully some of them have put his family tree online for me to discover my 2nd cousin 4 x removed!!!

Posted by My English and Irish Roots at 7:12 PM