It's been a week of genealogy bonanzas.....and today was the ultimate!!!  On a visit to see my 94 year old Uncle and his 90 year old wife, I gleaned some great nuggets about my Grandfather (who died long before I was born), and even a PHOTO!!!!

I'd always heard the story that my Grandfather was about to emigrate to Australia, but met my Grandmother, got her pregnant, married her and stayed put in California.  My Uncle said (completely unprovoked about this story), that as a young Farm Boy, he and a friend had flipped a coin to determine whether they'd emigrate to America or Australia from England.  America won the coin toss, but maybe Australia was never far from his mind (or after 20 years in America, he was ready for a new adventure).

This means I could've been an Aussie!!! Which may explain my obsession with Oz!!!  I've been there 6 times and absolutely love it!

When quizzed about what she remembered about my Grandfather, my Aunt said "I think he's in my wedding photos" --- what???!!!! OMG!!!!  We finally found her wedding album from 1945, and lo and behold there he is!!!  I'd never seen any of these photos, and I'd never seen a photo of my Grandfather without a hat on!!! 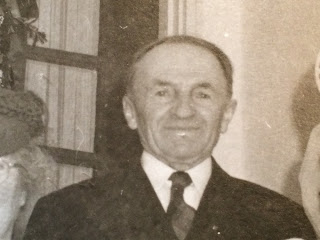 She said he was shorter than his boys, thin, wiry, quiet but very friendly. She also said that he was convinced his first Grandchild, my cousin was going to be a champion jockey, since he was small with bandy legs and lots of energy!  (That didn't turn out to be true, but I think he was projecting -- since he loved the horses, and died on his way to the track!)

This is the same Aunt that also produced an Autograph Book that my Grandmother had brought over from England in 1915!!!  What other treasures does she have???!!!!


Posted by My English and Irish Roots at 7:23 PM