Mary Toulson to Australia.....a long journey with a sad ending

I love when a random inquiry comes in via Ancestry --- just the other day I had a message from a woman in Australia, asking if her ancestors marriage to a Mary Toulson was possibly one of my Mary's.

I had a quick look at the possibilities and did find a Mary Toulson that had "disappeared" after 1861.  I'm not sure if I'd assumed she married and didn't look very hard for a marriage or what. Because, lo and behold I immediately found a marriage for her in the Summer of 1862 in Grantham, to James Alexander Stow.  Makes perfect sense, as he lived in Caythorpe, and she lived in Hough on the Hill (neighboring villages).  It also makes sense, as her sister Alice Toulson married Samuel Stow, a brother of James Alexander Stow.  So, we have 2 Stow brothers marrying 2 Toulson sisters -- keeping it all in the family.

It looks like they married and immediately left for Australia.  Not sure if it was a "paid emigration" scheme by a Parish (to remove the poor from their rolls), or if it was by choice.  In any case, sure enough there is James and Mary Stow emigrating on the Ivanhoe from Southampton to Melbourne and arriving in Feb 1863.  And shortly thereafter, in April she gives birth and dies.  The child, John Henry Stow, lives a month and then dies in May 1863.  A long journey with a sad ending. 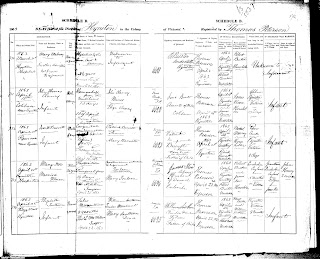 Posted by My English and Irish Roots at 10:04 AM