My GG Grandfather Thomas White's death at Levant Mine


On a visit to Cornwall this Summer, I revisited the Levant Mine, to further explore the place my GG Grandfather worked and died at.   A few years ago, I found his wife's obituary which mentioned that she had been widowed for almost 50 years after her husband was killed in an accident at the Levant Mine.  I knew he had died relatively young, but didn't realize it was from an accident. I quickly checked the British Newspaper Archive for the death date and found an article detailing his rather gruesome death.  The detail is amazing (and a bit morbid). 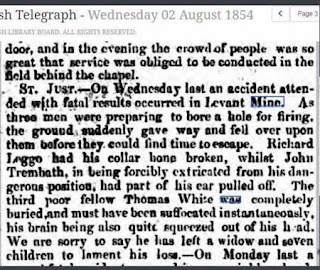 With this information I wanted to see if the Levant Mine had an records about his death, so brought all my info with me and during a break in my tour, I asked the Guide.  He was fascinated to hear that my ancestor had worked there and said he would pull the pay books after the tour!  Genealogy Gold!! 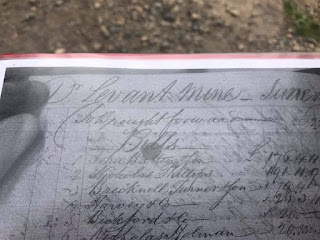 The Pay Books show payments paid out, not necessarily for regular wages, but for other payments as well.  In looking through the books for the approximate years my GG Grandfather would've worked there, we found an entry showing that he was a Tributer (so had his own patch of the mine to work), and a payment of 7 shillings for hauling a load of ore to the quay in Penzance! 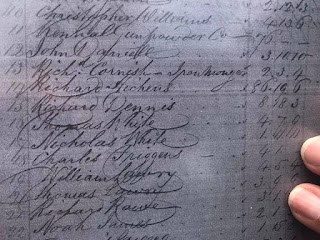 Now to try and figure out who the Nicholas White, listed below him is......not a son, probably a cousin who may have worked with him.
Posted by My English and Irish Roots at 2:39 PM