I've had a brick wall on my Fursland line forever.  My 4th Gt Grandmother was Mary Fursland.  From what I knew (via census, and Parish marriage/burial records) she was born about 1759. She married William Carew in Harford in 1788.  Her marriage entry indicated she was "of this Parish", but I can find no baptism record for her there.  She marries again in Harford in 1806 to Richard Williams. She dies in 1817 in Ivybridge (Ermington).

There are Furslands in Ugborough which is nearby, but none of those families matched up with her date of birth.

A new lead for a bastard child and an online tree, led me to investigate a new avenue and look further afield.   Harford Parish was known for marrying many brides/grooms from other Parishes.  It was the "Las Vegas" of Devon, if you will.  So possibly she came there to marry, or if she'd had a bastard child, maybe she left her home village and went to work as a servant in Harford?

The bastard child is George Merrifield Fusland, b Oct 1779 to Mary Fursland in West Alvington.  There are many Merrifield families in this village, so likely the middle name is indicating the Father! Now to find a Mary Fursland who would be the right age living in the area --- and voila! There is a Mary Fursland baptized 19 Aug 1759 in West Alvington to Walter Fursland and Mary Bunker.  Well that ties up nicely!  George stays in the area, and marries in 1799 in Thurlestone and has one son, George.

Now to trace the Fursland line back from Walter Fursland and Mary Bunker.  Luckily, it appears the Fursland's came from a bit of money/land and are fairly well recorded in documents going back for generations.  They are from around Widdecombe in the Moor, and with the help of an online tree I was able to trace them back to 1400.  Of course, this all needs further documentation and sourcing - but the logic makes sense with the documents I can find, and the fact that if they had money a son might have struck out south of the Moors to South Milton/West Alvington area of the South Hams. The distance isn't that far.

Going back in time - here's what I've got: 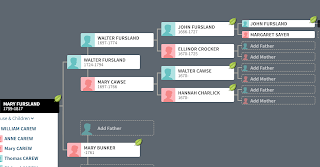 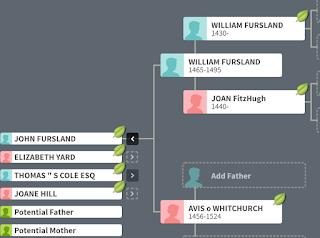 More research to come.....but to be able to potentially break through this brick wall and get all the way back to my 14th Gt Grandparents was a genealogical bonanza!!!!!  William Fursland b 1430 in Bovey Tracey, Devon is my 14th Gt Grandfather!

Posted by My English and Irish Roots at 4:12 PM