The Walsh's are coming out of the woodwork!  Awhile back, I ran across a Walsh Family Tree on Ancestry which looked promising, but on further inspection there were a lot of mistakes and I didn't trust that it was well researched, so set it aside.

Today on Facebook, one of the Irish community sites I follow, posted a link to the Oughterard Heritage page on the web.  I took a look and there were lots of family memories, and assorted postings about people who lived/worked in Oughterard.  As far as I know, none of my family actually lived in the town, just the surrounding district.  When I saw a post called "Walsh's of Oughterard" I thought I'd have a look.   I was met by this amazing photograph: 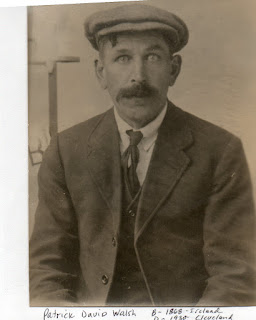 This photo and face just seemed to leap off the page to me, as if I recognized him.  I think I had seen this photo in the poorly researched family tree, but it also looked like photos of my Grand Uncle. I looked through the information on the page, and it stated that this man's parents were David Walsh and Sarah Walsh of Finnaun.  BINGO!!! This rang a bell, and I quickly found Sarah in my tree, she is my Gt Gt Grand Aunt, sister to my Gt Gt Grandfather William Walsh.

I had Sarah and David Walsh's marriage record from 1866, with the correct Father's -- and the children listed, matched up with the children I had for them via baptismal records.  The naming patterns match up, as well.

The man in the photo is either Patrick David Walsh or his brother John "Sean Guy" Walsh.  Patrick emigrated to the USA and lived in Pennsylvania and Ohio.  John stayed in Ireland.

The man who posted all of this information to the Oughterard Heritage page is this man's grandson and is in Australia. From comments on the page, there are descendants in Boston and England as well.  I've emailed the Australian man and am anxiously awaiting more info!

Amazing that with such a common name as Walsh, I've been able to keep adding to this family!

Posted by My English and Irish Roots at 8:21 PM