Walsh's in the background......but now in the forefront

While cleaning up my family tree, I came across a WALSH family that I had no death dates for......so with a little sleuthing, I figured that they could possibly be buried in Spiddal.  So I turned to my trusty Graveyard Inscription Book, and after looking through many WALSH entries, found the family I was looking for, and lo and behold they were literally next to my Grand Aunt's headstone (she being Margaret Walsh Folan).   While this totally made sense, it was something that I had never looked at before.

This Walsh family was only found this past Autumn, as they descend from a previously unknown brother of my Gt Grandfather.  This brother, Peader Walsh, only came to light via a DNA match to his great grandson.  We came up as 3rd cousins, but couldn't determine the common ancestor.  The village that he came from was very small, and with only one Walsh family in it in 1911.  I emailed a cousin in Galway, and he said "it's just up the road, and there are still Walsh's there".

About a month later he emailed me and said he'd walked up the road and had a long chat with a descendent, who said he came from Peader Walsh, who had moved from Muckanaghkillew (my ancestors village) in the late 1850's!!!!   Without DNA this brother and descendents would never have been found and connected to my tree!

So, back to the cemetery book......when I found the entry for the headstone with the names that I knew, I wondered if I had walked right by the headstone when I was at the cemetery in July 2015.  So I pulled out my photos from that trip, and lo and behold found a photo of my sister posing next to a Celtic Cross, and behind her were the headstones of Peter Walsh and family!!!!  It's like the ancestors were there all along, asking to be found! 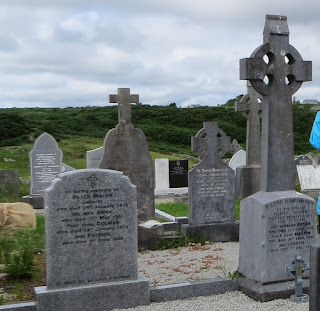 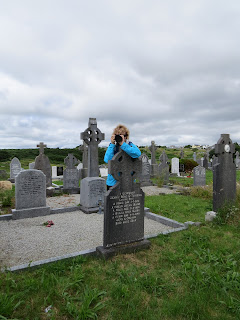 I'm still blown away by the fact that we walked right by them, and didn't associate them with our Grand Aunt!


Posted by My English and Irish Roots at 4:02 PM