My Pearse/Pearce family has always been elusive, a common name in a difficult county (Devon), with frequent crossings into Cornwall just to confuse things!  My Pearce great great grandfather (Henry Pearse) was a bastard, but luckily his Father's real name William Pearse was listed on his birth certificate.

Henry was an interesting character, and through luck I traced him via Royal Marine records to his home village of South Brent, Devon.  I found his Pearse line going way back in the village. But, what had become of his Father, William who had sired him?  He never married Henry's mother.  I had a possible death in Plymouth for him, but it was just a guess.

Recently, dear Henry turned up in the Bodmin Gaol records for "breaching the peace" with his wife. When I got the records it noted that there were letters sent/received between Henry and his wife Susan in St. Ive (which proved it was him), and his brother William in Callington (Cornwall).  What? Who was this???  The Bodmin Gaol record was for 1849, so I checked for a William Pearse/Pearce in the 1851 Census for Callington.  Bingo! Found him and wife Elizabeth.  He was born 1819 in Callington, so was 2 years younger than Henry.  All this made good sense.

Then I checked to see if there were other Pearse's in Callington in 1851 and what do you know, but a William Pearse, age 70, born in South Brent, Devon and his wife Purdence!!!!  South Brent, that is the ticket -- tying this all neatly together!!

Further searching found William Pearse marrying Prudence Perry Betty on 2 June 1819 in East Stonehouse (Plymouth), Devon.  He was a full age Mariner, of the Parish. She was a spinster of full age of the Parish. 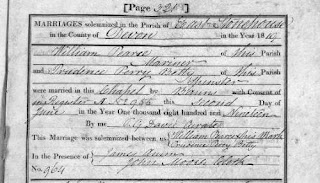 They went on to have son William Pearse who was baptized on 19 Sept 1819 in Callington (which was Prudence's birthplace).  So a bit of a shot gun wedding!

Son William (my GGG Uncle) goes on to marry Harriet Trezise/Tresize/Treise (mispelled in Civil Registration as Treise, when it's likely one of the first two variants) in 1843.  They had Elizabeth, Harriet, William, Thomas and Lucy, before Harriet dies in 1877.  He went on to marry a Susan Nicholls in1879, and he died in 1902.

All of this very exciting.....can't find headstone or burial info for many of them, and need to look for Civil Reg's for them to further prove things -- but it all ties up nicely.  While this whole line are just half-related, it is still exciting to finally nail down what happened to my GGG Grandfather William.
Posted by My English and Irish Roots at 3:06 PM