After patiently waiting a couple weeks, my mailbox was finally filled with a package from the Cornwall Records Office today!  I'd sent off for the prison record of my Gt Gt Grandfather in 1849. I wasn't sure what to expect, as the index said there were letters between he and his wife and brother. I hoped for those letters, but realistically didn't expect them to survive.  I hoped for at least a physical description.

The 2 images - photos of the original register - gave me lots of good information, but of course raised additional questions. 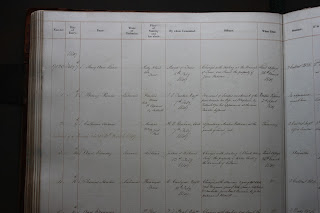 There was a wonderful physical description of him, more detailed than I could've hoped for!

And there was information that his brother William was living in Callington in 1849.  The William I can find there in 1851 is a possibility, but says he was born in Callington, and in a later census St Austell.  This doesn't square with his brother's birth in Harford, Devon. So not sure where we are with that......is it even the right William in the census? 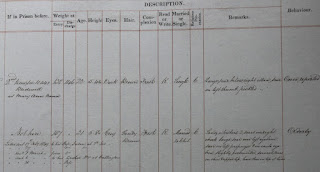 The "want of sureties", means he couldn't find anyone to vouch for him or put up bail, so he sat in jail for 3 months before the next Quarter Sessions.  And when that date came up, his wife didn't appear to press charges, so he was released.  I found this reported in the West Briton and Cornwall Advertiser newspaper.

More investigation needed, but fascinating stuff!!!
Posted by My English and Irish Roots at 5:48 PM