A whole boatload of new Yorkshire records were added to Findmypast.com today! So, off I went to find some Toulson's!

Also, was able to fill in actual marriage dates and photographs of the actual certificates for over 50 Toulson's!!!  What a bonanza!  This in turn gave me some approx birth dates for some of the spouses, and fathers of spouses, to help establish the correct person in earlier census returns (helpful with common names -- once you've got the approx birth year, place of birth and father, it's fairly easy to find the correct John Smith). 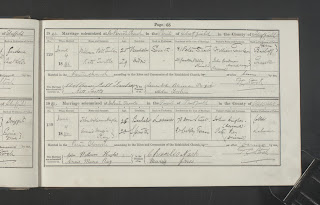 Now to move on to the burials and baptisms!!  There are 87 Toulson burials and 133 baptisms.  Some are too early date wise (most of my Toulson's seem to have migrated from Lincolnshire to Yorkshire in the mid to late 1800's).  There are very few that are not part of my family, just a few miners from an area called Worsbrough.

I still suspect that there is a connection between my Toulson's and the Yorkshire Toulson's, somewhere up the tree in the 1600's.  At one time, someone suggested that the Civil War may have been when some of the Northern folks ended up down in Lincolnshire/Nottingham, for military purposes.  Need to do some historical reading to see if that is a plausible theory.


Posted by My English and Irish Roots at 8:48 PM