My Gteat Great Grandmother was Elizabeth Rodda, who lived to a great age of 92.  Her name always intrigued me, as it's very Cornish -- and I've spent a good deal of time researching her family.

Somehow, I'd never done much on her younger sister Jane.  I had some note that she possibly married a Grose or maybe a William Harvey.  One of her brothers went to Australia, and I suspected maybe she had as well, as I couldn't find her in the 1841 Census.

As I've been going back through my direct lines, I've been cross checking the British Newspaper Archive and the 1939 Register for clues on descendants.  While Jane was probably too early for these resources, I did another check on Ancestry, and found several trees that showed Jane had indeed married a James Grose.  While I don't always trust other's trees, I did the due diligence and all the records pointed directly to this being true, and that they had emigrated to Frostburg, Maryland, USA.

This was a key point, as other Rodda's had migrated there as well.  Her brother John had 3 sons that emigrated there in the 1870's -- so they followed and went to their Aunt!

I had traced most of those Rodda descendents in the past, but had never seen Jane, as she was under her married name of Grose - and I didn't put the clues together!

In looking at Jane's journey, she and James Grose married in 1840, had four children in St. Just in Penwith, and then emigrated to New York in 1850. They settled in Frostburg, where there was mining work, and had two more children there.  She died in 1901. 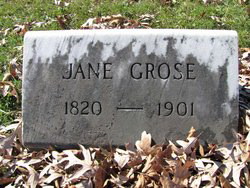 She left MANY descendants, which are all relatively close cousins to me!  It is always a wonder when I find a new CLOSE connection that I've previously overlooked (or been stumped on).
Posted by My English and Irish Roots at 10:47 AM