My Grandmother was a twin, and while she emigrated from England to the USA, her twin sister married and stayed in Devon, England.  We were lucky in that the connection was close, and there was alot of correspondence between the families.

My Great Aunt Minnie (my Grandmother's twin), was a fantastic letter writer! She owned a stationery store, so maybe it was part of her vocation, but she really was a fantastic writer.  We received letters often, always in small envelopes, with strange British stamps, in her distinctive handwriting.  Her letters were a recap of the simple life she and her daughters led, the local weather, the shopping, the upcoming holidays, and her commentary on politics and news of the day.  She often mentioned family visits and news, which kept us "Yanks" informed of what everyone was up to in England.

At some point I expressed an interest in the family tree, and she sent a hand written family tree, which is a treasured document to this day. 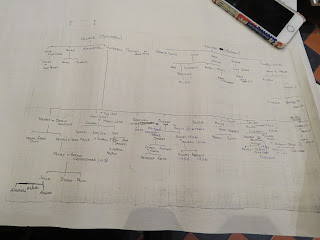 She kept the family connected, although we didn't really realize it until many years later.  She wasn't just writing to us, but to other family members as well.  Only in the last few years did I find my second cousins -- who I vaguely knew of (from the family tree and a few mentions in letters).  As we've gotten acquainted and I've visited in the UK in the last few years, we've found that Minnie wrote them lots of letters as well!

On this trip, I met up with these cousins again, and they had dug up all their copies of Minnie's letters. What a treasure trove!!! 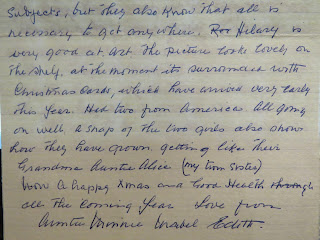 In this letter, she mentions the cousins in America and how the snapshot of the 2 girls shows that they are resembling her twin sister.  This is myself and my sister......amazing to read this some 40 years later, while visiting my 2nd cousin!

We have committed that we will all scan our copies of these letters to share with each other.  It is such a treasure to have these snapshots of life in Devon in the 1960-1980's.  We all have such fond memories of Minnie and her daughters, and we are keeping those alive, by sharing these letters.
Posted by My English and Irish Roots at 1:24 PM