Wow.....sometimes trolling through old newspapers can turn up some absolute gems!  Today, I was looking at some old Cornish papers online, and thought I'd see if there was anything available for 1853 for Edward White, my GGG Grandfather.  I don't know who his parents were (although I have suspicions) - and was hoping to find an obituary with that info.

No online coverage for 1854, so moved on to his widow, Elizabeth Rodda White, who died in 1904. BINGO!!! Found her obituary, which says she was 92, one of the oldest residents, and the relict of Thomas White, who died some 50 years ealier at Levant Mine!!  Wow.....this is news to me! 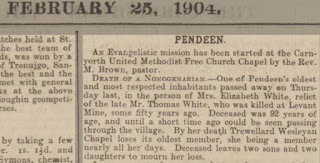 So then I decided to see if just googling "Levant Mine 1854" would show me anything relating to her husband Thomas White's death.  BINGO again!! I found a Rootsweb chat, which had info from the West Briton newspaper in 1854 (which doesn't seem to be online).  Kindly it had been transcribed and described poor Thomas's death.


West Briton and Cornwall Advertiser. Friday 4th August, 1854.
FATAL MINE ACCIDENTS AT ST. JUST - On Tuesday last, three men were
engaged "shotting down lode" in the usual way, in their pitch at
Levant Mine, St. Just, when a large "queer" which must have been loosened by
the holes previously blasted, suddenly fell on them, killing one of
them, Thomas WHITE, instantaneously, and dreadfully bruising the other
two, of whose recovery however, hopes are entertained.
On Wednesday last, as three men named Thomas WHITE, John TRAMBATH,
both of Bojewyan, and R. LEGGO, of Botallack, were at their work in Levant
Mine, a quantity of ground gave way, instantly killing White, and
severely injuring Trembath and Leggo. Deceased who was much respected
in the locality in which he resided, has left a wife and seven children.

Very sad, but now I know why he died young, and this explains why some of the children scattered -- my Gt Grandmother headed to Eastern Cornwall to work as a domestic, and her sister married and emigrated to New Zealand,
Posted by My English and Irish Roots at 1:39 PM